skip to main | skip to sidebar

Old Cairo, the Egyptian Museum, and the Sleeper Train

Our next day started in the land of Goshen at Tel-al-Yehudiya ("hill of the Jews"), where the Israelites would have lived and worked for Pharaoh before the exodus. We discussed several Biblical passages here, but as I surveyed the flat landscape, rich soil, and green palm trees, what really stood out to me was that life in Egypt was good, predictable, and secure--the exact opposite of life in Israel. (I have more thoughts on that, but I think I will write a separate blog on them).

On our way to Old Cairo, our bus hit a car...and kept driving. Remember how I said there are no traffic lanes or lights? Well, I guess there just aren't many traffic laws, period. It's a different world.

In Old Cairo (or "Coptic Cairo"), we visited a two coptic churches and a synagogue. One was built in honor of Mary and Joseph's flight to Egypt. This was the highlight of my day, because I met a group of 10-15 Egyptian girls ages 13-14 in the bathroom. They were super excited to practice their English and take my picture, and we spent most of my time there hanging out in the courtyard. 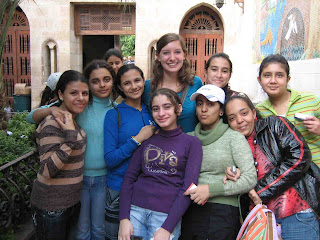 We spent the afternoon in the Egyptian Museum, where we saw things I remember seeing in my middle-school textbooks, like the contents of King Tut's tomb and the mummies! I saw the mummies of both Ramses II and Tuthmose III, who are both thought to be the Pharaohs during the exodus (depending on whether you agree with the early or late date). They still had hair and fingernails!

After some time at the market and a stop at a bathroom, we headed to the train station. That night I slept on the overnight train as it clacked down the tracks from Cairo to Aswan. 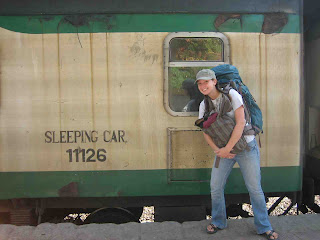